A gateway to a churchyard in Kirkby Lonsdale, Cumbria. Not often I get out of Lancashire to do some dry stone walling. This was a restoration of an almost completely demolished wall between a now privately owned former vicarage and its neighbouring church.

Wall repair in the village of Dolphinholme, Forest of Bowland, early spring 2021

Part way through doing the Slaidburn wall. The walling stone is from Brown’s quarry of Longridge Fell, making it a sustainable yet new dry stone wall. It has a light buff hue more reminicent of Cotswold stone than the local variety.

Above is a before and after photo from an insurance job in Manchester that I did September 2021. Not actually dry stone walling but I do a bit of mortared work and will travel to Manchester for some projects.

A dry stone feature wall I did near Garstang in Autumn 2016.

Overlooking Beacon Fell. This is on Longridge Fell in Forest of Bowland. Finished Spring 2019.

Above is a ‘virgin’ wall placed to enclose a driveway area with a feature that was sympathetic to the existing boundary walls, all dry stone.

The finished wall above…

Above. A before after pic of a collapsed wall corner by the roadside near Mellor, above Blackburn that I fixed march 2020. An afternoon’s work.

Job I carried out in Higher Wheelton near Chorley / Blackburn in Summer 2018. A tree had taken out a wall at the entrance to a Georgian mansion. Re built it with a curve on and mortared copings.

Another pic above of curved wall from Wheelton. 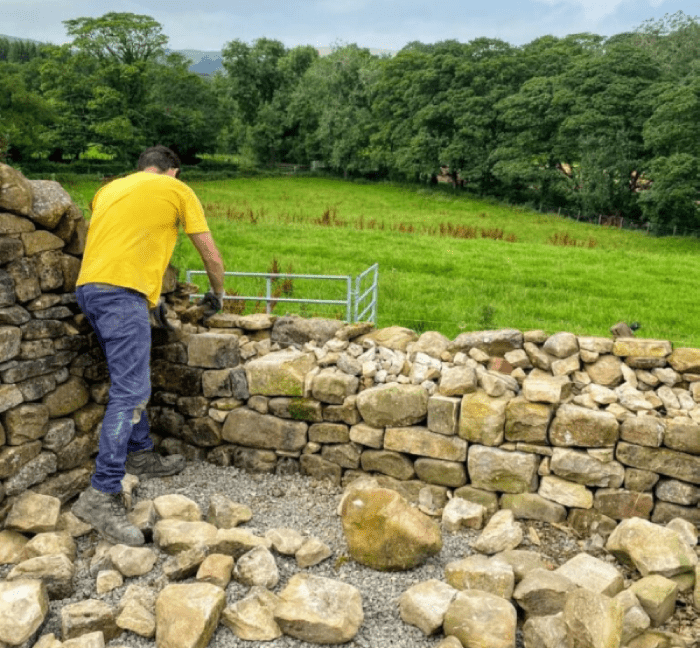 A rare pic of my skinny behind, working on a small gap repair in Roughlee near Pendle in Lancashire.

Above: Dry stone wall I built near Longridge in The Ribble Valley but near Preston about 6 years ago. This is a 7ft high retaining wall using the very rough locally quarried stone. It creates an attractive and sympathetic boundary and feature to the property.

A wall near Pendle that I moved 3 feet to one side to widen the driveway. This was during the long, hot summer of 2018.

Gap repair and wall end near Wigglesworth in North Yorkshire, (enemy territory for me!). A car had knocked this down and then sped away. Did this December 2018.

A farm wall I repaired as an insurance job in February 2019. Driver had smashed into it during the night, taking out 20 mteres of wall.

This was the damage before I started re-building the wall in Wigglesworth.

Setting out the base stones at a job near Barrowford/Barnoldswick in late summer 2018.

Above, dry stone wall Edd rebuilt in the Pendle area, near Barrowford, in Summer/Autumn 2018

Above shows before and after pictures of a repair to a wall near Blackburn that I fixed during summer 2021. It was caused by a driver crashing through (unharmed!)

Before photo of a dry stone wall at Littlebrook Nursery in
Great Harwood near Accrington  that had been damaged by a car in Winter 2017.

And the finished article…..

Corner fallen down on a wall near Longridge in Spring 2018.

The wall after I re-built it. This only took a few hours to do.

Little dry stone wall on a driveway in Longridge that was knocked over by a neighbour’s car. (handbrake left off).

And the finished wall a day later… hunbest

Call for a quote